Freedom of the city granted to Grays businessman 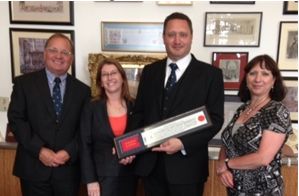 A LOCAL man has been granted the Freedom of the City of London in recognition of his contribution to the stationary industry reports the Thurrock Enquirer.

Corringham man Steve Crocker, 42, was granted the Freedom on the City in a ceremony at Stationers Hall, St Paul’s on Wednesday, 28 August.

The director of Grays-based CTS Sales and Services told the Enquirer: “It’s an honour to be involved. I am pleased and proud to receive the Freedom of the City but to be recognised and supported by my friends and peers in my industry was the biggest honour. I’ve worked in the stationary industry for 23 years and I really enjoy it.”

The ceremonial title is not the only award Steve has received this year. He was also honoured to be made Freeman of Stationer’s Hall by the Livery of Stationary and Newspaper makers earlier this year.

Steve added: “The Freedom of the City goes back to medieval times and used to be an advantage meaning you were free to trade in the city of London. It used to be you could take your sheep over London Bridge, although I don’t think that is the case anymore!”