A MAN was arrested after the M25 Dartford Crossing between Kent and Thurrock was closed in a security alert.

Drivers were stuck for more than seven hours in nine-mile tailbacks after a pedestrian, who was spotted behaving strangely, was held.

The Queen Elizabeth II Bridge and both tunnels were shut when Kent Police said officers found a suspicious item.

But after Army bomb disposal teams investigated, they said the item posed no threat and reopened all routes.

The A20 was also closed in Dover as officers stopped a coach as part of their inquiries into the Dartford Crossing incident.

The coach was removed from the scene, police said, and the road was later reopened. No further arrests were made.

Graeme Brouder, 36, from Twickenham in south-west London told the BBC: “I was coming off the other side of the bridge towards the tolls at about 16:30 BST on Friday.

“I was about five cars from the barrier and I saw a guy out of the corner of my eye come running along the side of my car, he ran to the barriers.

“He came back towards the cars, he went across into the lane next to me, tried to get in the car next to me, he was shouting something – I had my windows up so I couldn’t hear him.

“He was shouting at that car, tried to get in that car, ran past mine, tried my door handle, and then ran down the lane behind me and he was just shouting at everyone.

“He was running around, he was trying to get in everybody’s cars.”

Traffic trapped on the bridge was eventually released and diverted back into Essex, while some trapped vehicles were released from the tunnels on Friday night.

The toll booths were also cleared of traffic.

Tailbacks stretched through Kent, on the anti-clockwise M25, and in Essex, on the clockwise stretch.

In London, there were severe delays in East Ham, Beckton, Bow, Woolwich, at the Blackwall Tunnel and all approaches to the M25.

The A282 Dartford to Thurrock crossing over the River Thames, which consists of the Queen Elizabeth II Bridge and two tunnels, is used by 140,000 vehicles a day.

Traffic heading south into Kent uses the bridge, while northbound vehicles travelling to Essex use the tunnels, with the M25 linking up either side.

DARTFORD update: Police say there is “no threat” and both the Bridge and Tunnel are now open both ways.

Police stopped a coach in Aycliffe, close to the Port of Dover, hours after a suspicious item was found near the Dartford tunnel toll booths.

The incident at the Dartford crossing, where a male pedestrian was arrested after he was spotted “behaving unusually”, is also believed to have involved a coach.

2200 hrs: Police confirm incidents at #Dover and #Dartford are being linked. 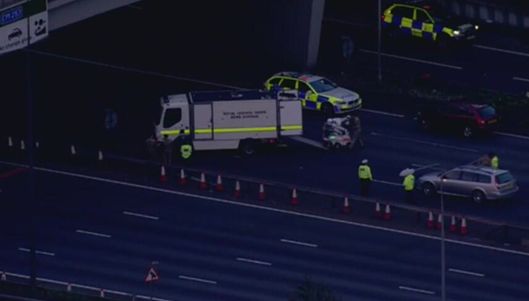 Kent Fire and Rescue Service has been called to assist Kent Police at an incident at the Dartford River Crossing.
Police were called to the Dartford Crossing at 4pm following a report that a male pedestrian was behaving unusually. The male has been arrested. Officers have located a suspicious item and have closed the crossing whilst enquiries continue. The crossing will be closed for some time and motorists are advised to find alternative routes. Two fire appliances have been sent to the scene and are on standby.

No real update. Dartford Crossing remains closed in both directions whilst the police deal with incident. Thanks to motorists for their patience 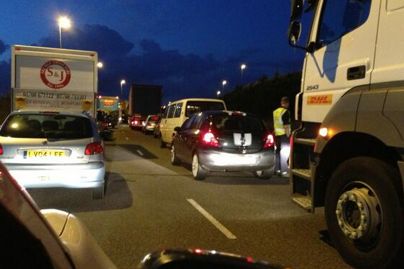 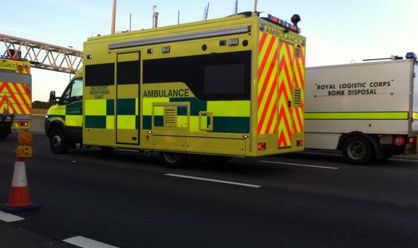 Reported that Bomb squad passed Junct 2 and heading to Bridge

Kent Police said a male pedestrian who was seen “behaving unusually” had been arrested.

“The crossing will be closed for some time and motorists are advised to find alternative routes,” a spokesman said.

Lorries being parked up.

Cars being turned round and sent back towards Essex.

Understand a person has been arrested and the police are investigating a suspicious item.

A13 Greater London – Queueing traffic on A13 eastbound between Wennington Interchange and Lakeside.

A13 Essex – Queueing traffic and long delays on A13 westbound between Tilbury and Lakeside.

M25 Kent – M25 closed and severe delays anticlockwise from J2, A2 (Darenth Interchange) to J30, A13 (Lakeside), because of a security alert. Diversion in operation – vehicles under 4.0 metres tall can use the Blackwall Tunnel. Tailbacks for four miles. Congestion to J3, M20 (Swanley Interchange).

YT understands that main area of incident is the South Plaza, i.e: area on Kent side as you approach tolls.

M25 Kent – M25 closed and severe delays anticlockwise between J2, A2 (Darenth Interchange) and J30, A13 (Lakeside), because of a security alert. Diversion in operation – vehicles under 4.0 metres tall can use the Blackwall Tunnel.

Essex Police tell us it is a Kent Police incident. The bridge is their location. Have put call through.

Ensign Buses warning of long delays in the Lakeside area.