Goldmine to make a sparkling return to Orsett Hall 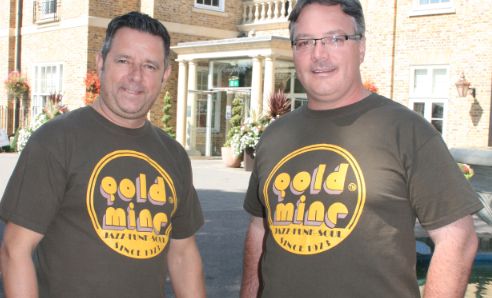 revived the famous Goldmine name from the 70s and 80s era.

The Goldmine was the No. 1 Night Club on Canvey Island, Essex that was made famous for its Jazz, Funk and Soul nights, first hosted by the legendary DJ Chris Hill.

Steve and Simon were both Soul DJs that played the Top House pub in Aveley and The Prince of Wales pub in South Ockendon. Steve says “I used to go to the Goldmine when I wasn’t working myself. People would flock in from all around the country just to be part of the famous Soul scene. The Club was demolished over twenty years ago which has left us with just good memories”.

Steve , who has lived on Canvey for twenty years now has dreamed about bringing the Goldmine name back in a big way, so in 2009, Steve and Simon set about making this dream a reality.

The Soul scene has really exploded over the past few years, largely being fuelled by the local internet stations such as ZeroRadio and JFSR, which host some of the very best Soul DJs about.

Simon says, “We worked on setting the business side up first to make it official by way of trade marking the wording and logos. The wording took eighteen months alone, as we had to get special authorisation from a National Company using the same name within our classification”.

Steve and Simon are passionate about their Soul music and are very excited about launching their first Soul night on the 8 November 2013 which is entitled Five Star Soul at the Goldmine, Orsett Hall and already have four more nights planned for next year. The event will run from 7.30pm and 2.00am and is strictly for the Over 30’s. The events will take place at the luxury Orsett Hall which was chosen because of its plush appeal and the fact that it can hold a very large capacity of people and also offer overnight accommodation. A generous donation from ticket sales will be given to St Luke’s Hospice in Basildon. The final line up of the DJs for the November event will be announced in the next few weeks. For more information, go to www.iamagoldminer.com or www.orsetthall.co.uk

Tickets are already available from the Events Team at Orsett Hall on Tel: 01375 891402 or Email: events@orsetthall.co.uk or you can buy tickets online at www.eventbrite.co.uk/event/6289174089 (booking fee applies).

Steve and Simon have also re launched some Goldmine merchandise in the way of
T- Shirts and car stickers, just like back in the day, which are available from the website www.imagoldminer.com