Rumours Abound at The Thameside

Following on from their success in this year’s Thurrock Drama Festival and their appearance at the Edinburgh Fringe, Courts’ latest offering highlights the lengths the upper classes will go to in order to save themselves from scandal. The play centres around four couples who are invited to celebrate a 10th wedding anniversary, but upon arrival discover that their hosts, and the help, are nowhere to be seen.

First to arrive are Ken and Chris who discover the husband, Charley, upstairs with a bullet hole in his ear. They are soon joined by Len and Claire fresh from an accident in their brand new BMW. Next come Ernest, the Harley Street psychoanalyst, and Cookie with her intermittent back spasms; last to arrive are Glenn and Cassie, whose tense relationship is never far from an explosive argument.

As the guests attempt to keep the truth first from one another and then from the police, their web of lies becomes so entangled that they soon find themselves tripping up on their own inaccuracies and are forced to impersonate each other in order to protect themselves and their host. The play culminates with Len (pretending to be Charley) concocting a fairly plausible story to explain the strange goings on to the two police officers.

Directed by Mike Jones, Rumours will be performed at the Thameside Theatre, Grays from 10-12 October 2013 with evening performances at 7.45pm priced at £10 for adults and £8 concessions. The group will also be performing a Saturday matinee at 3.45pm with all tickets priced at just £5. Tickets can be ordered via thurrockcourtsplayers.co.uk or through the theatre box office 0845 300 5264. Please note this play contains a small amount of strong language. 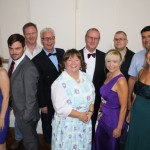