Football: Grays put a shift in to dislodge Dockers in FA Cup 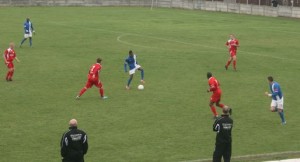 GRAYS ATHLETIC progressed into the third qualifying round of the FA Cup with a workmanlike 3-0 victory against local rivals Tilbury at Mill Field.

The game was played in tricky conditions with a swirling wind and bumpy surface.

Grays earned the first corner of the game in the 9th minute when Connor Mead did well to intercept Joao Carlos. Leon Lalite sent over a probing corner that Gray’s defender Craig Pope connected with his head but went wide of the post.

With the Grays defence looked jittery at the end of their last game, boss Ryan Kirby would not have been reassured by a mix-up in the 10th minute which nearly let Sam Cutler in.

The game became bogged down in unforced errors and mistimed passes.

Grays took the lead in the 35th minute after Kenny Beaney was brought down in the box. It seemed like a very harsh decision. Joao Carlos cooly slotted it past keeper Ramos.

Sub Jack West nearly added a second a few minutes later with a diving header from a Jared Small cross. Ramos was in action again as he produced a great save from Small.

Carlos has been on great form this season and illustrated it once more when in the 42nd minute, he dispossessed Mead and unleashed a shot that shook the bar to its foundations.

He had not stopped there as just before half time, he ran rampant in midfield, slipped the ball to Jack West who neatly dispatched it past the keeper to score.

Tilbury came out full of intent in the second half and immediately, Lee Weemes went close.

In the 56th minute, Danny Francis sprang to life we he shook off the Grays defence but his shot was thawrted by the out-stretched foot of Lamar Johnson.

Grays killed the game in the 62nd minute, when Jared Small broke free on the right and Jack West bundled the ball in from close range. Tilbury once again felt that the referee got it wrong.

The game petered out into passing practise for Grays and a frustrating afternoon for Tilbury who will feel they lost to three questionable goals.