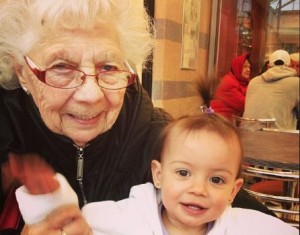 TRIBUTES have been paid to Stifford Clays resident, Vera Vine, who has passed away at the age of 87.

Vera was known and loved throughout the borough. For many it was due to her campaigning for better bus routes in the town and for others, it was just her love of life and friendly demeanour.

Her daughter, Dorita (Dee) Vine said: “Mum was such a positive person and a real character. I have found it amazing, over the last few days, since her death, how she touched so many people.”

Vera was born Vera Havis in West Thurrock. She worked in the Thames Board Mills and married Arthur Vine.

Another person who had fond memories of Vera was Deanna Lane.

Deanna said: ” I used to see Vera at Lakeside. She would pop in and see a few of us at the shops. She was so chatty, so friendly and lovely with children.

“We will all miss her. She was a real character.”

The local councillor, cllr Angie Gaywood remembers Vera as well. Cllr Gaywood said: “Vera was not backwards in coming forwards with her campaign for better buses in Stifford Clays. It seems ironic and very sad that Diana Hale and Vera Vine have gone within weeks of each other.”

There will be a funeral service at 12pm on Monday October 7th at Corbets Tay.