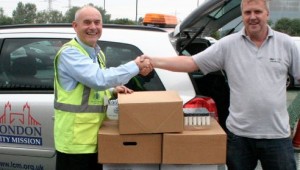 This was for the Christmas Parcel Appeal that the Lighthouse Seafarers’ Mission organises every year. Parcels are made up of items which also include woollen hats, scarves, gloves – and a Christmas card!

P&G have kindly given to the appeal for the past few years. Many other donations come from Thurrock’s church network and all the parcels are made up by volunteers from West Thurrock Chapel, where Paul has an office.

The parcels are given out to seafarers docked along Thurrock’s riverfront over the Christmas period. Most crew members are thousands of miles away from their families, so this little act of generosity from the borough of Thurrock means a lot, and fulfils the borough’s motto, “By the Thames to all peoples of the World”.

“The people of Thurrock always show their immense generosity to the guys on the ships at this time of year,” says Paul. “For the past couple of years, we’ve been able to hand out over a thousand parcels to Filipinos, Chinese and other nationalities who find themselves spending Christmas berthed at Tilbury Docks or the Purfleet jetties. I would like to thank Paul Wilson at P&G for the company’s very generous donation.”

For more information about the Seafarers’ Christmas Parcel Appeal and how and what to donate, please see http://www.transformationthurrock.com/Articles/373019/Transformation_Thurrock/Mission/Tilbury_Seafarers_Mission/Christmas_Parcels_for.aspx.