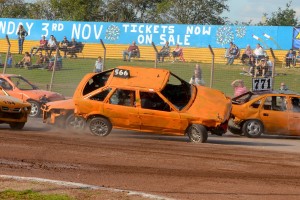 SEVENTY Rookie Bangers took to the track at Arena Essex on Sunday, all painted orange to pay tribute to the much missed Banger and Hot Rod racer, Terry Skeef.

The second half car heat saw an early stoppage as a big pile up claimed Jamie Webb, Sam Watson and Mason Clark, amongst others. At the restart Wayne Londors was thundered into the pit gate causing another brief stoppage. Another restart saw Paul Ring launched off the cars of Jon Barrett and James Warden into an airborne collision with the armco whilst Liam Wells slammed into the wall by the gate, soon to be joined by Ray Rumbold. Chris Whiteman came through for the win.

The consolation started with Alfie Rye slamming the home straight wall and Mark Carroll taking a huge dive at Darren Walton, who did well to control the resulting moment. After a brief stoppage Debbie Taylor was slammed into the wall and took a fair amount of damage before she could escape to the safety of the infield. Paul Chapman took the win.

The Skeefy memorial final started with Sonny Sherwood taking a high speed flight over the inner marker tyres before he recovered to crash Steven Arthur. Tony Abrehart, two years after retiring from the sport, was back to pay tribute to his old friend and team mate Terry Skeef and he was going very well, spinning out Sean Chapman and taking the lead as others fell by the wayside. He rode his luck, getting half spun by Dave Cuffley and tangling with Andy Chapman on the run to the flag, but with an almost simultaneous red flag, due to Tracy Woolner getting on her roof on turn one, it was enough and he was emotional as he picked up the memorial trophy.

With so many cars wanting to contest the Destruction Derby, the whole track was opened up for the event, rather than just the usual pit bend. Predictably cars scattered in all directions at the start and Dave Cuffley took a hard hit from Grant Underhill before he speared back across the track directly in front of Sonny Sherwood. Paul Ring was in good form as he crashed car after car as his own gradually fell apart around him, eventually he burst into flames bringing about another stoppage. Unfortunately the event fell apart at this point with several cars ignoring the red flags and general confusion before an end was called on safety grounds and Wayne Londors was awarded the win.

The Stock Rod Supreme Championship saw Dave Burton hold off Wayne Shackleford for the win. The track strangely seemed to be very slippy off line so when Burton got stuck behind backmarker, Jamie Lee Potter, he was unable to get round him and settled behind him for the last five laps of the race. Ordinarily this should have allowed Shackleford an attempt at a pass but he noticeably lost pace in the final laps, a blown head gasket the later diagnosis. Steve Gooch fought a good race from a long way back on the grid to get into third.

The Terry Skeef memorial final went the way of Ian Jardine, who benefited as the rest of the field tripped over each other in their battle for second place.

Lee West won the Essex Championship in the SuperBangers but was unable to prevent Tommy Parker from taking the overall track points title, with poor reliability once again costing West a clean sweep of race wins earlier in the afternoon.

The remainder of the season is huge at Arena Essex with several major events on the horizon. The first is the Olly Moran All Ford Granada memorial, with an entry of over 200 Granadas on Sunday 20th October causing an overspill event to be scheduled for Saturday evening 19th October. At 6pm on the 19th a select entry of around 40 all Granada Bangers from the reserve list will contest a full meeting with the winner of the final being seeded through to the following afternoons action. The Lightning Rod Supreme Championship and Mini Stox Essex Championship provide support on Saturday night. Meanwhile Sundays all Banger meeting begins at 1:30pm, with drivers from Arena Essex past and present doing battle with many of the sports stars from across the country, with a good smattering of European entries too.