Rugby: T-Birds go to the top of the league 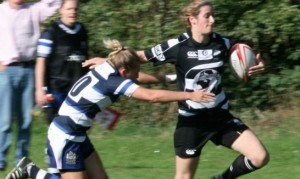 HAVING gone down a league to the Championship for this Season, the T-birds have been demonstrating the gulf between the top 2 levels of Women’s Rugby by scoring trys with gay abandon and claiming a 5 try bonus point on the opening 3 games, but the prospect of travelling all the way to Bristol with a back row made up of 2 wings and a scrum half was worrying to say the least.

The unseasonal October sunshine and fine weather allowed T’s to execute their game plan of playing everything at pace and avoiding unnecessary contact.

Ts were quickly into their stride and though a spirited Bristol matched T’s lightweight pack for long periods, they had little answer to the quality of T’s international class backline.

Great interplay between Scott and Harvey quickly created an opportunity for Rachael Burford to show her class and score the first out wide on the left.

Spirited Bristol defence and players in unfamiliar positions restricted further opportunities, but with 20 minutes gone T’s put together one of their “Purple Patches” and 3 trys in 12 minutes put the game almost beyond doubt.

Running back a defensive kick, most of the T-Birds had a hand on the ball before the move was finished by a fine offload from Micallef to Captain of the day Nichols who crashed under the posts.

Shortly after, mounting Ts pressure was rewarded by the Bristol 9 having a 10 minute rest for killing the ball and the rampant backline revelled in the extra space with Harvey and Scott both crossing the whitewash.

At 0-24 it looked as though the game was all but over, but with a flanker injured on the sideline and a referee deciding to award a succession of penalties that put Bristol right on T’s line, Bristol pulled one back with the last play of the half for 5-24.

From the T’s point of view, the second half was somewhat bizarre, after some haranguing from the Bristol coach at half time, the referee seemed to completely change his interpretation of the Laws and proceeded to whistle Thurrock off the park.

2 minutes into the half he yellow carded flanker Emerson for “multiple team offences at the breakdown”, then proceeded to award penalties until Bristol were again within striking distance from the tryline which they duly crossed.

At 10-24 and with their tails up, Bristol suddenly believed they could win and gave it everything.

Thurrock dug in and defended as though their lives depended on it and even back up to 15 they were pinned in their own 22 for long periods and successfully held up a Bristol drive over the line.

However it’s impossible to keep Scott quiet for long and with 15 minutes to go, her fine solo effort split Bristol apart and claimed the 5th try and the vital bonus point.

The remainder was about containment as Bristol pressed and Ts defended doggedly on a soft, energy sapping pitch to notch up their 4th successive win.

The bonus point now puts Thurrock 3 points clear at the top of Championship South, with next week’s game against Saracens second string who sit second in the table looking like a League decider even at this early stage of the season.

Next home fixture at Oakfield against Saracens on 13th October KO 2.30.

We can promise you great training and great social life. Just turn up on a Wednesday evening at 7.30.