THE DAILY Express political editor, Patrick O’Flynn has been nominated as the lead candidate for UKIP in next year’s european elections.

O’Flynn was described by the Daily Telegraph’s Peter Oborne as a man with an “Exceptionally acute mind and excellent judgement”.

And so it was a great boost for Clive Broad, UKIP’s candidate for the Stifford Clays by-election on Thursday, that Patrick, along with fellow european candidate Tim Aker and dozens of campaigners hit the streets of Stifford Clays.

Before they started, YT spoke to Patrick about the challenges ahead.

A full list of candidates appear on our politics page. 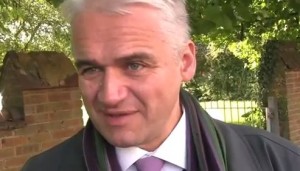