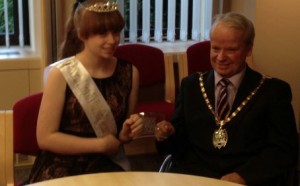 IT HAS been a busy year for Thurrock beauty queen, Courtney-Lee Collins.

So we thought we would ask, her community-minded mother Wendy to tell us how the last few months have been.

“Courtney-Lee has very recently started to enter pageants and as a result of one was awarded North London’s Dazzling Beauty teen 2013. Within this role she was invited to meet The Mayor of Thurrock recently and awarded a lovely glass plaque for her fund raising efforts.

Over the last few weeks Courtney-Lee has successfully run two online photo pageants for boys and girls. She built her own websites, did her own advertising and arranged prizes, of sashes, tiaras, certificates etc, I am proud to say she raised £200. This money is being split between Follow Your Dreams and The Sodje Sports Foundation.

It has also been agreed by Basildon Hospital (we are waiting or a date to be arranged) that Courtney-Lee will visit the children’s ward in ball gown and tiara to let the patients meet a ‘princess’. She is really looking forward to this and is hoping to take up the hospital’s offer to help with further fund raising on their appeal.

Courtney-Lee recently appeared with the cast of TOPS at the Thameside Theatre as a dancer In Calamity Jane. I attended opening night tonight and the show was amazing. They have a fantastic cast and Director Ann Sullivan always puts together an outstanding show.

“This is Courtney-Lee’s fourth production with TOPS and as well as being a great confidence booster, she’s learnt a lot from Ann and her crew. Courtney has recently auditioned for a part in Pirates of Penzance, the first production from the newly launched TOPS kids. A show with the entire cast being under 16. She is also auditioning next week for a part in Thoroughly Modern Millie, whose rehearsals will run alongside the ones for Pirates of Penzance.