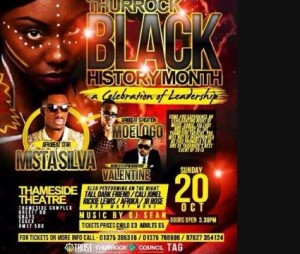 A STAR-STUDDED cast is set to appear at the annual Black History Month in Thurrock on Sunday.

Mista Silva is dubbed the modern voice of this  generation, bringing Afrobeats to a new audience.

MoeLogo has performed in the UK and in The Gambia with Jamaican reggae artist Busy Signal, winning over a crowd of 60,000 people, with his “admirable panache and eclectic sounds”.

Following the success of his first Afrobeats release, he became highly sought after in the burgeoning UK Afrobeats scene and in the Summer of 2012, he wowed audiences with a mix of Afrobeats and Jazz-fusion at the Nigeria House Concert, performing alongside Ice Prince, M.I and Jesse Jags. Not long after having participated in the introduction of the 2012 Olympic Games, MoeLogo was invited to perform at the renowned Wembley Stadium for the Africa Unplugged Festival which also featured artists from all over Africa including the likes of Femi Kuti, 2Face Idibia, Sarkodie, Zahara, Iyanya and many more.

This is a Black History Month Celebration not to be missed.

One Response to "Mista Silva to star in Black History Month"