Campaign hots up to save the “Corringham Green Belt”

RESIDENTS are starting a petition against plans to build 800 homes on green belt land.

The Save Corringham Green Belt campaign group has reformed to fight new proposals from Cogent and Iceni for a housing development on green belt in north east Thurrock.

The group, which was set up in 2008, successfully fought plans for a similar development on the green belt and convinced councillors at Thurrock Council to reject the proposals.

But the group fears that a revised planning application could now be given the go-ahead.

Group spokeswoman, Anne Sandu, said: “The latest plans for development will affect the everyday lives of everyone living in Corringham and Stanford. More and more green belt land is at risk of being lost forever with more residents, more traffic and more pollution.”

“We believe there are already a number of brown field sites in the borough that could be developed and that the existing green belt land should be protected from development.

Fellow campaigner Viv Humphrey, said “There is already too much traffic on the country roads of Corringham and Stanford. The Southend Road and Lampits Lane are particularly over crowded and it is difficult and often impossible to get around during rush hour and when schools start and finish.

“We are concerned that the existing infrastructure including local hospitals, schools, GP’s the A13 and A127 will be unable to cope with such an increase in people living locally.”

The Save Corringham Green Belt campaign group has already raised its concerns at a meeting with East Thurrock MP Stephen Metcalfe and local councillor James Halden.

Anne added: “We are pleased that Mr Metcalfe is once again supporting our campaign to save the green belt. They both share our concerns about the loss of this valuable land and James Halden has also pledged his support for our campaign.”

The Save Corringham Green Belt campaign group will be collecting signatures to support their new petition in Corringham town centre on Saturdays over the coming weeks. 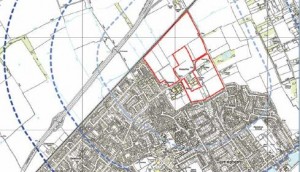