A CHAFFORD Hundred resident has reacted with anger at the stance Thurrock MP, Jackie Doyle_Price has taken on the Spurs “Yiddo” chant controversy.

For many years, Tottenham Hotspur fans have uttered the chant as both a reference to the jewish fan base at the club as well as a reaction to anti-semetic abuse from other clubs.

However, writer David Baddiel has taken issue with this. He has said that the use of the word is unacceptable.

Mr Baddiel was disappointed that the prime minister, David Cameron took the stance that the term is only offensive if it was “motivated by hate”

Chafford Hundred resident, Steve Silverman agreed with Mr Baddiel and felt so strongly about this that he wrote to Thurrock MP, Jackie Doyle-Price.

Mr Silverman said: “I am writing to you further to the Prime Minister’s recent observations regarding the behaviour of the supporters of Tottenham Hotspur football club. He has declared publicly (and I paraphrase) that their self-referential chanting of the word “Yid” is acceptable because it there is no malice attached to it, it is empowering, and it is all harmless fun. In expressing this opinion, Mr Cameron has displayed a degree of ignorance that belies both the education from which he has benefited and the position he now holds.

This chant has been a running sore for many years. Were it true that it is sung by Jewish fans using irony in the face of anti-Semitism, it would still be offensive to many. It is, however, a long time since Spurs had a fan-base with a high Jewish contingent. As I understand it, eighty to eighty-five per cent of its supporters are now non-Jews.

“Yid” is derived from the German word. ‘Jude’. When Jews were being beaten up in the streets in Nazi Germany, this was the insult with which they were taunted.

There is absolutely no context which justifies the use of this word, and Mr Cameron has no authority, moral or otherwise, to decide on my behalf that it is acceptable. From someone who regards himself as a statesman, this is crass and ignorant behaviour.

“It is utterly depressing that the Football Association shows more sensitivity towards this issue than the man who leads the country. It will be of little concern to him, but this week he lost my vote.” 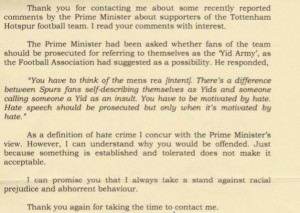 Mr Silverman is unhappy at the response.

He told YT. “I think Jackie Doyle-Price is out-of-touch. The case is unarguable and the police have already made arrests. Would she have made the same statement if it was the “N” word or the “P” word. I am very disappointed.”