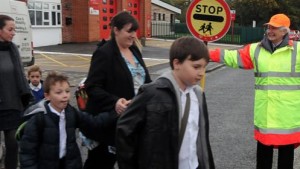 Drivers are legally bound by the 1984 Road Traffic Act to stop at these areas.

To highlight the campaign patrols are wearing an orange fluorescent and reflective tabard over their uniform as well as a orange hat.

During the last year, the road safety team at the council have received a number of complaints from patrols about the selfish behaviour of some drivers. The complaints ranged from failing to stop, driving around the patrol when they are on the road, using abusive language, threat of physical violence and loudly revving the engine while the patrol and children are in the road

Changes to the 2001 Road Traffic Act allow patrol’s to cross adults as well as children.

Cllr Wendy Curtis, Deputy Mayor of Thurrock Council said: “School crossing patrol officers play a vital role in ensuring school children are provided with a safe route to and from the school. They should be able to do this without fear of intimidation and threating behaviour from inconsiderate motorists.

“Drivers please remember if your car journey should take you through a patrolled area please allow extra time, slow down and be prepared and willing to stop when requested to do so by the patrol officer.”