Appeal after Chafford teens threatened with “gun” and robbed on train 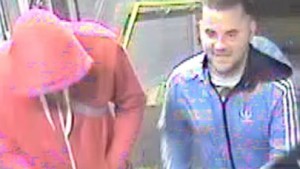 were robbed on a train between Romford and Upminster.

Investigators have released CCTV images of two men they would like to speak to in connection with the incident, which took place on Thursday, 17 October.

Detective Constable Michael Hatcher, the investigating officer, said: “The two victims – both aged 16 and from Chafford Hundred – boarded an Upminster-bound train at Romford around 7pm.

“During the journey, two men, who also boarded at Romford, approached the victims and demanded them to hand over their belongings, including phones, wallets and keys.

“The men threatened them, claiming they had a gun – although no gun was seen – before grabbing one of the boys round the neck. Fearing for their safety, the two victims handed over their mobile phones, a passport and headphones.

“As the train arrived into Emerson Park station, the two teenagers left the train before reporting the incident to a local police station.”

Officers are currently carrying out a number of enquiries into the incident including seizing CCTV from the train, station and surrounding area. Images of two men have been released today as part of the investigation.

DC Hatcher added: “The men targeted two young men and used violence to take their belongings. We are continuing to build a full picture of exactly what happened, and I’d urge anyone who recognises any of the men to come forward and assist in our enquiries.”

The men are believed to have links to Stanford-le-Hope.

Anyone with information is asked to contact British Transport Police on 0800 40 50 40 quoting background reference B3/LNA of 29/10/2013. Information can also be passed to the independent charity Crimestoppers, anonymously, on 0800 555 111.