HELP for Heroes (H4H) has today opened a store at the intu Lakeside shopping centre in Essex, building on the success of the first H4H store that opened in St David’s shopping centre, Cardiff in 2012. Plans have also been revealed to open a further eight stores around the UK within a year.

Going against the usual trend for charity shops, H4H sells new, branded merchandise, rather than donated or second-hand goods like most UK charities. Consumers are able to buy H4H branded products that they want and need, such as cooking utensils and leisurewear, but with the profits going to charity rather than global corporations.

These profits will be used to help H4H to continue to deliver support to those who have suffered life-changing injuries and illnesses whilst serving our country. Part of this support is provided through H4H run Recovery Centres such as at Chavasse VC House in Colchester.

Matthew Hopkinson who is the Director of the Local Data Company, the UK’s leader in retail location data and insight, points out that less than 5 percent of charity shops are located within modern shopping centres. He suggests that H4H’s ‘Shopping with a cause’ model could be used by other charities to increase their credibility on the High Street as well as their profits. “Quality, value, trust and a cause are all values close to most shoppers hearts and wallets. Help for Heroes ticks all those boxes and as such is a great example of innovation within the charity sector.”

Managing Director of Help for Heroes Trading Limited, Helen Beebe said: ‘We have a loyal and wide-ranging customer base who love our products and want to show their support for the charity. A portfolio of stores in key locations around the UK will supplement our already successful e-commerce business, further raising awareness of the cause and generating more income for the charity’.

Emma Parry, Charity co-founder and Executive Chairman of H4H says: “We are delighted with the expansion of Help for Heroes Trading Limited. It not only allows us to spread awareness about the charity but it will also bring in more money to support our heroes. This is particularly important as our troops withdraw from Afghanistan, as for our wounded, injured and sick service personnel their battles will continue long after the war ends.”

To keep the store running smoothly, H4H is looking for volunteers. If you are a passionate H4H supporter and have a few hours to spare each week, why not consider becoming a volunteer sales assistant in the new store? For more information contact volunteer.lakeside@helpforheroes.org.uk 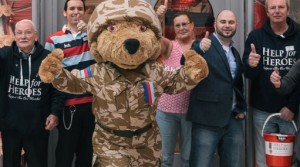