The students were not over-awed by the other schools that were there. On the contrary, they produced two sparkling performances.

The first performance was Romeo and Juliet followed by Macbeth. Both performances were a success because they were so well acted with young actors who were confident, enthusiastic and very very able.

They worked the stage, they engaged the audience and told the story.

They were all aided by wonderful costumes,, great lighting and tight direction.

They were a joy to watch.

The YT cameras popped into rehearsals where we interviewed teacher Benjamin Stamp and then filmed the opening sequences of each performance. 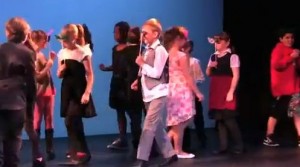