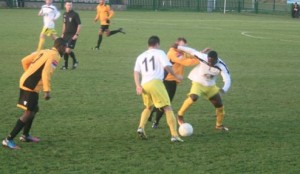 THE ROCKS staged a great comeback to come from 2-0 down to beat Merthyr Town 4-2 in the FA Trophy.

The Rocks soon got into their stride as they looked determined to take a grip of the game.

But early on they missed two golden opportunities. The Merthyr keeper Cutlan made two mistakes but on both occasions, Rocks strikers insisted on taking a touch and with that lost the chance.

Thurgood was tackling like a terrier in midfield as they dominated possession. In the 15th minute, Thurgood fired in a free kick that the keeper once again fumbled but the Rocks could not cash in.

Rocks were cutting up their defence at will. Merthyr defender Gary Colborne received a yellow for a lunge. From the free kick, David Bryant found space in the area but the ball skirted across the goal.

The Martyrs got their first sight of goal in the 25th minute with a free kick outside the area but the kick fell easily into keeper Mott’s hands.

With no goals forthcoming, the Rocks were becoming frustrated with the referee.

In the 36th minute, the ball pin-balled around the area. It fell to David Bryant who side-footed it but the keeper did well to save it with his feet.

In the 41st minute, Merthyr broke the deadlock when Kayne McLaggon swept the ball in from close range.

The Rocks needed to step up the pace but the second half began with half chances missed and the ball continuing to ping around the box.

Meanwhile, Merthyr looked like a much more relaxed and confident team. It made you wonder if the Rocks had used up their best chances.

Sure enough, in the 57th minute, Merthyr went 2-0 up as fleet footed Ian Taylor stepped past the Rocks sterile defence to shoot from just inside the box.

Rocks soon got back in the game when Steve Sheehan powered home a header from close range in the 62nd minute.

Now Rocks had a sense of urgency but not urgent enough to shoot first time. However, they had a saviour in Steve Sheehan, who equalised in the 70th minute with a side foot shot into the net.

It got better a few minutes later when a long high ball gave the rattled Merthyr defence trouble and Jason Hallett was able to pounce on a rebound.

Jason Hallett was enjoying the space afforded to him and he made the score 4-2 when another break saw David Bryant in space and he was able to square the ball to Hallett who neatly placed it into the net.

Rocks go into the draw for the FA Trophy 1st Round proper hoping for a plum tie with a Blue Square Premier opponent.

One Response to "Football: Rocks stage mighty comeback to stun Merthyr in cup"