Is preparation for the Lower Dartford Crossing already underway?

ONE OF our readers set out for a walk from Tilbury Fort to Coalhouse Fort last week. By all reports it was quite a nice walk until he was confronted by a number of very large lorries thundering down the path. Infact, the path was impassable and so he had to go back.

According to sources, the digging is part of a new path being built.

However, our keen walker was over in Gravesend and was told by a friend that a similar excavation is going on there.

One would have thought that a warning would have been issued that one of Thurrock’s nature and tourist walks now had large lorries driving down the path, a path that was virtually impassable.

Naturally, the Lower Dartford Crossing conspiracy theorists may have something to say about all this.

We spoke to Thurrock Council, who did not seem to be aware of it. One would have thought that an advisory notice would be in place. It also looks that a lot of people, who were intent on visiting the Coalhouse Fort, are turning back.

YT went for a walk on Saturday afternoon and filmed the digging in action.

Option A: Men digging a new path?
Option B: Something to do with Tilbury Power Station?
or
Option C: Option C? 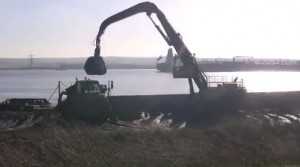