Football: Grays dumped out of cup by Bury

GRAYS ATHLETIC’S wretched run of form continued as they were dumped out of the FA Trophy 5-1 by Bury Town at Ram Meadow.

The first goal came from a penalty after Ian Gayle was judged to have handled in the box. Joao Carlos equalised with a lovely individual effort and for a time it looked as if Grays were going to be competitive.

But the second goal seemed to take the wind out of their sails as a free kick far on the left side, floated over and Adam Bailey-Dennis had the simplest of tasks to nod the ball in as he was totally un-marked.

The third goal was the result of awful defending by Ian Gayle who allowed Ryan Semple into score.

Grays went 4-1 down when Shane Tolley sent a 30 yard piledriver high into the Grays net. It was a great goal.

The fifth was another example of dreadful marking.

Grays now have to get their head down over the next six weeks and face a number of games against sides in a similar predicament.

The secret of their success last year was the settled side they put out between January and April. They now appear to be falling into the bad habits of previous seasons and look unsettled.

The final nail was scored by 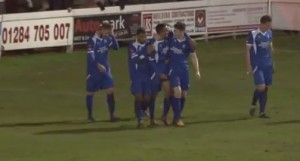