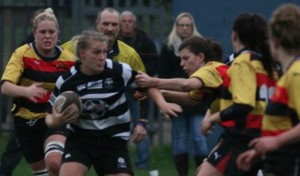 THIS game was a real measure of how far the Thurrock T-Birds have come in a few short years.

Just three seasons ago, Thurrock were beaten by Richmond Ladies 3rd XV and complained bitterly that the team had been packed with 2nd XV players.

In this 11 try trouncing, the T-Birds just brushed the Second XV aside almost without breaking sweat and demonstrated that they should be playing at the top level against Richmond 1st XV.

Despite fielding quality players who gave good individual performances, Richmond could not cope with the togetherness of the T-Birds as a team.

With Scott back from England Sevens and Burford putting in a Player of the Series performance for England 15s in the Autumn Internationals over the last 7 days. The T-Birds cast off the shackles of percentage Rugby and cut loose to run almost everything. The midfield axis of Scott, Burford and Harvey creating panic in the Richmond ranks and opportunities everywhere for the Thurrock back 3 of Harris, Emerson and Francis.

However the running rugby was based around a pack, that led by hard charging Captain Foy, quickly imposed themselves on Richmond and dominated both the set piece and the loose play at the ruck.

Less that 10 minutes into the game with an attacking 5 meter scrum, Thurrock drove Richmond back over their own line for No8 Phelps to claim her first of the day.

Despite Richmond making 3 visits to T’s 22 in the next 10 minutes, the dominance in the lineout and scrum meant that the ball was quickly reclaimed and winger Harris outpaced the defence out wide for a run in under the posts.

Despite Richmond having some decent possession, they struggled to penetrate the thin Black and White line of T’s defence and with the backs now running riot, Burford and Harvey claimed one each for the score to reach 28-0 on the half hour as Scott kicked all the extras.

At this point Ts got a little too loose and several trys went begging as passes failed to reach hands but as the half drew to a close, Richmond lost a player to the bin after a shocking hair pull that prevented a certain try. From the kick to the corner and the resulting lineout, Ts just drive the maul over the line for Phelps to claim her second and the vital 5th for the bonus point.

There should have been one more, a 20 meter catch and drive just failed short of the whitewash and then Emerson was held up over the line by great defence from Richmond’s Pascal, as the ball was spun wide.

The T-Birds came out for the second half at a scorching pace that Richmond could not live with. In under 2 minutes, Francis was over in the corner for the 6th of the day.

Thurrock were again guilty of overplaying and spurned a few chances, while Pascal denied them a score yet again.

Before long though, Francis had another chance and although brought down inches short, Emerson in support, just picked up and dotted the ball over the line for number 7.

As the game entered the last quarter Richmond could not cope with the sustained pressure of being pulled all over the park and their structure began to crumble.

Phelps claimed her hat trick, this time on the end of backs move instead of at the back of the pack.

Scott then executed a perfect cross kick for Harris to claim her second and Micallef rolled off the back of a maul unnoticed and sneaked down the blind side with Richmond wondering what the crowd was so excited about, to claim the 10th of the game.

Fittingly, Scott who had pulled the strings all day closed the game out. Despite Richmond reclaiming their own kick off for the first time all day, T’s turned the ball over on their own 22 and attacked. Scott put Harvey into space and got the ball back at full pace on the halfway line. Evading 3 would be tacklers, she touched down under the posts for try number 11 and then kicked her 7th conversion for a personal points tally of 19 and unsurprisingly was awarded Back of the Match.

Nichols who had carried hard all day and so often provided the pass to set the backs off was Forward of the match.

Next game is away at Hove on Sunday 24th November, KO 2pm.