PLANNING for over 500 homes in Aveley has been approved by the Thurrock Council planning committee.

The application for homes at the former Firemans Club in Purfleet Road, Aveley will now go forward to the secretary of state but many in the chamber had the feeling that the current political climate to push along housing development and meet supply demands will over-ride concerns that some may have over building in the green belt.

One person who had such concerns was Tory shadow leader, cllr Phil Anderson. Cllr Anderson went even further and as you will see on our filmed item, cllr Anderson called it “The death of regeneration in Thurrock.”

His concerns were echoed by Labour councillors Richard Speight and Steve Liddiard.

But they were outvoted by Labours councillors Charlie and Wendy Curtis, Conservative Barry Johnson and the chair of the planning committee, cllr Terry Hipsey, whose highly vocal speech was perhaps the most significant of all.

The applicant, Westview Properties run by former Grays Athletic chairman Mick Woodward went away happy and there was also cheers from Grays Athletic fans in the chamber and across the borough.

Grays fans believe (and who would contradict them) that the application, with the proposal that a sports hall may be built at Treetops School in Grays may see land apportioned to the club to see them return to the Grays area. 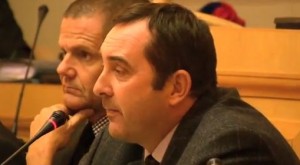