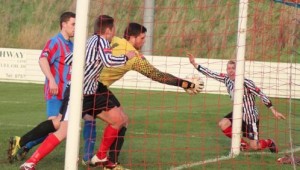 Tilbury returned from play off contenders Maldon and Tiptree pointless, disappointed after such a strong showing early on. Tilbury made changes again to there line up with Mead, Nightingill, Blackman and I’Anson returning to the side. The Dockers were further hampered due to injury to Donovan Simmonds. Tilbury were out the blocks immediately with Nathan Ashton firing a free kick towards goal. On 4 minutes Tilbury took the lead when Ashton crossed for Ryan Blackman to head home against the underside of the bar and over the line. With Tilbury continuing to impress, Sam Cutler had a long range effort saved well. It took the home side to have there first effort on goal until the 23rd minute when Bradley Hunter’s header was sell saved by Ramos. Maldon gradually came into the game and Gardner and Hunter again went close, but denied by Ramos, The equaliser did come on 31 when a corner from the right was headed home by Hunter, despite the best efforts of Ramos. Maldon finished the half strong.

Maldon took the lead just 25 seconds after the break when a ball was hit forward for Hunter to run on to score. Tilbury lacked bite and only saw Cuter fire over from 30 yards and Francis shooting low to the keepers left in a lacklustre second half. Tilbury were further hampered when substitute Jesus Mendez who had only been on the pitch for just 6 minutes, was dismissed by the referee for retaliation after being flagged for offside. Maldon remained in control.

The control was rewarded deep in to injury time when they broke and found Adam Condon who rounded Ramos to score into an empty net.

After the game Manager Paul Vaughan said “I was pleased with the first 25 minutes where we played some excellent football, but we failed to show this form in the second period that disappoints me”

The result sees Tilbury move down one place to 13th.

On Tuesday, Tilbury travel to Suffolk to play Needham Market. – 7.45pm kick off.