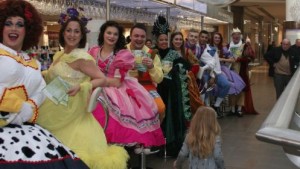 Saturday the cast of the Thameside Theatre Pantomime visited Lakeside Shopping Centre to spread the word of Panto and certainly brought a smile to many a shopper’s face with their colourful costumes, big grins and sense of humour.

Rehearsals have now started and the Pantomime opens at the Thameside Theatre, Orsett Road, Grays on Friday 6 December 2013 running to Sunday 5 January 2014. Leading the cast is the lovely Natalie Cassidy as the Fairy, who we all know as Sonia Jackson in EastEnders and more recently Strictly Come Dancing and Celebrity Big Brother. Essex Boy Jay Perry will be taking on the lead role of Jack and is well known for being part of the teen pop group S Club Juniors, who had a string of hits in the noughties. West End star Wain Douglas who has been a favourite with the audience at the Thameside Panto in recent year’s returns as Dame Tilly Trott.

Tickets are selling fast but it won’t cost you a bag of magic beans to come to the best value Panto in Essex! There will be some fantastic singing and dancing and a large dose of comedy, sparkle, magic and spectacle thrown in for good measure!! So don’t delay, get your tickets today by calling the Thameside Theatre Box Office on Tel: 0845 300 5264 or online at www.thurrock.gov.uk/theatre!