Concerns over new bid for homes in Lakeside

DEVELOPERS behind a plan for 320 new homes and a new supermarket at Lakeside have been criticised by a prominent business leader who says the proposals will have a negative impact on existing businesses.

Hammerson UK Properties owns land off West Thurrock Way which includes an area known as Lakeside Autopark, which includes a number of motor dealers, also the former Gala bingo club and adjacent restaurants and a previously developed site that has lain vacant for many years.

It has announced plans to redevelop the sites to build a new Morrisons supermarket, two restaurants and a petrol station.

They have recently completed 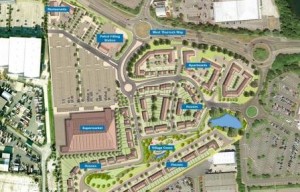 a consultation process with residents in West Thurrock, who are reported to have responded with concerns about the shortage of school places in an already oversubscribed area.

A spokesman for Hammerson said: “The proposed masterplan has been developed to support the long held aspiration of Thurrock Council to transform the Lakeside Basin into a new town centre at the heart of the local community.”

However, existing businesses on the site are concerned about the way news of the proposals have been handled by Hammerson, who are their landlords.

One of them, Bruce Vickers, who has served on the Borough Council’s planning committee and is a leading light in local organisations including the Thurrock Community Chest Charity, told the Enquirer: “Myself and other businesses on the site are somewhat concerned about the way this public consultation was brought about.

“We have been aware of the owners’ long term thoughts about the site and its possible redevelopment but consideration should have been made to the impact on existing businesses who hold long term leases with the site owners.

“My own lease, for example, is to 2020 but clearly these plans will impact on that and will cause concern among our established customers and certainly prospective new ones.

“I am in the process of compiling my business plan for the next few years based upon the lease I hold but now I find I may have to think differently, and without proper consultation from the landowners about these development plans.

“I am sure fellow businesses in the area including TGI Fridays, KFC and other motor dealerships on the ‘autopark’ will be disappointed at the lack of information and consideration given by our landlords to our businesses.”

James Rowbotham, Development Manager at Hammerson, said: “The site has been identified in Thurrock Council’s emerging planning policy as a major redevelopment site as part of the proposal to create a new regional town centre at Lakeside.

“We have commenced public consultation and hope to submit an application to the Council shortly thereafter. Those businesses that currently occupy the site will be able to continue to trade normally while the early phases of the development are constructed. No occupier will be asked to vacate the site prior to the end of their lease.”

A Thurrock Council spokesman added: “The Council is aware of this proposal being developed and is in dialogue with the developer.

“We look forward to receiving the planning application and will consider it at the Council’s Planning Committee. We will also consider the implication for school places as a result of this development as part of our established pupil place planning process.”