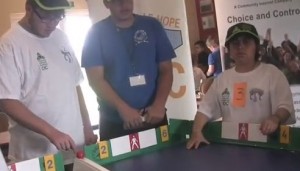 The first ever Thurrock Table Cricket League Match at Stanford Le Hope Recreation Ground has been played. The newly formed Thurrock League – part of the National Table Cricket Community League – has commenced thanks to involvement from Essex County Cricket board; specifically Patrick Ward. The ECCB have donated the use of specialist Table Cricket equipment and thanks must also be given to the Stanford Recreation Ground User Group for supplying a venue every Monday for fixtures. Prior to official fixtures prospective participants have received coaching from a qualified Table Cricket coach, who will be present to officiate at each league game.

South Ockendon won the toss and elected to bat. Kelly-Marie opened the batting and hit an impressive 22 but Grant from STCT took a wicket and so managed to restrict her to 17 – still the top score of the day. After further worthy contributions by Keith and Terry – 14 respectively and a 16 from Allen, the only other Socks wicket to fall was that of James to the tight bowling of Phillip. Team Captain Sunny was last man in adding another 12 to the total. Hitting a team total of 84 runs and losing only two wickets meant Socks ended their innings looking strong on 274.

Kelly-Marie’s fine form continued with her over of bowling producing a hatrick. STCT’s innings didn’t improve when Paola fell victim twice more to Keith. Just as STCT were beginning to lose hope, up stepped STCT Team Captain Danny striking two 4’s and a 6 of three balls. Despite last man in Mark joint top scoring for the day and a team total of 92 runs, losing a further two wickets in their innings meant it wasn’t enough to prevent Socks from taking the first victory of the League.

Each wicket is equal to a deduction of 5 runs so for Stanford Table Cricket Team it meant the loss of 35 runs, having been beaten by 17 runs they are assuring spectators that they will be more cautious during next week’s fixture against Beacon Hill Buddies (BHB).