Football: Hard-working Grays grab a vital away win at Hampton 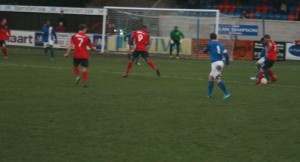 LET NOBODY say Grays Ath do not try as the Blues put in a real 90-minute shift to take all three points in a 2-0 victory against Hampton and Richmond at the Beveree Stadium.

The Beavers looked like a team that enjoyed sweeping forward and signalled their intent, early on, with a lovely ball to Charlie Moore on the left. Moore nutmegged Ian Gayle and his shot was deflected away for a corner.

Joao Carlos showed his class in the ninth minute when he found space on the left side of the box but his shot just went wide of the far post.

There was plenty of space for Carlos and Dan Fry on the flanks and Leon Lalite was controlling things well in midfield.

But as the game past the quarter hour, Grays were more than holding their own.

The Beavers second corner of the game came to nothing but it was another example of Hampton players not only dominating in the air but having too many free headers.

Karle Carder was a handful and earned a free kick in the 22nd minute. The kick was floated over but although Charlie Moone’s header was strong it was straight at Lamar Johnson.

Hampton defender Darren Powell was lucky to just receive a yellow card when he hacked down Joao Carlos wheh his lovely mazy run left him with just the keeper to beat. Keeper, Rodney Chiswehe did well to push Lee Flynn’s free kick away.

Hampton swept forward again and a lovely move that went from right to left ended with Johnson doing well to stop another Moone shot.

But fair play to Grays, they kept beavering at The Beavers and got their reward in the 37th minute, when Jack West latched onto a through ball, sprung the offside trap and slid the ball home to put Grays in the lead.

Hampton fought back but it brought out the best in Phil Anderson and Ian Gayle who produced some very timely interceptions. As the game went on it was becoming clear that this was a blooming partnership.

Hampton tried to step it up at the start of the second half but were being let down by too many wayward passes.

Grays looked full of running and started to produce some fine breaks. In the 53rd minute, Joao Carlos ran half the length of the pitch only for his shot to come off the bar.

Hampton started to run out of ideas and so brought on two subs including former Thurrock winger Luke Wanadio. It was sub Kofi Halliday who made the first impression with a Carlos-like run that saw the ball palmed away by Johnson.

Jared Small came on for the injured Dan Fry as the game really started to heat up. It became a test of Grays Ath stamina and concentration.

Kenny Beaney never stopped trying and his tireless direction of the team was key. The goal mouth scrambles became more intense and if Grays had a fault it was that they were not taking the heat out of the game.

But as a corner in the 81st minute showed, keeper Lamar Johnson was having a very solid game.

It was testament to Grays’s hard work that they got a second goal in the 85th minute when Joel Nouble broke free, had his shot saved by the feet of the keeper but Joao Carlos kept his cool to make it 2-0 to Grays.

This was a vital three points and said a lot about the Blues character under pressure.