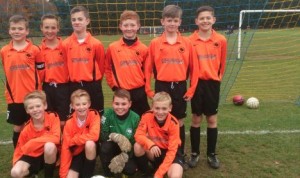 , three weeks of football trials were held at St Clere’s Secondary School to select the players that would represent Thurrock in the forthcoming season. Over 70 players from 37 Primary schools in Thurrock attended and thirteen boys from 12 different primary schools were selected.

Kevin Watts, joint manager said, ‘It was a tough decision to select a squad of players boys who we felt would follow in the success of previous Thurrock’s teams, but we feel that we have selected a group of boys who will represent their school and Thurrock with pride. District football is played at a high standard, and we have started our season with some very promising results. Things are looking good for a successful season. The players are all very enthusiastic and want to do their best to bring some silverware to Thurrock and make their school, parents and Thurrock proud. We have achieved some excellent results against Barking and Dagenham, Basildon and Ashford and progressing well in a couple of cup competitions.’

Steven Crabbe, joint manager said, ‘The boys have worked hard so far this season and are proud to represent Thurrock and all are looking forward to the year ahead.’

The district team play weekly matches on a Saturday in the Essex League, the Gills’ Shield, the Crisp Shield, the Lester Finch Trophy and the prestigious Southern Counties Cup and will be playing teams from across the south of England. The squad of players also attend the FA affiliated Jersey Football Festival where Thurrock play teams from across the country and representatives from Jersey.