Thames Barrier closes as Thurrock braces itself for tidal surge

By Staff Reporter on December 5, 20134 Comments 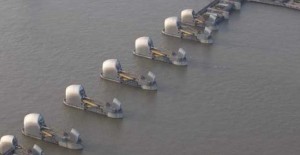 THE Thames Barrier will be closed tonight to protect the Thurrock coastline from floods as the east coast braces for the biggest tidal surge for 30 years.

Forecasters have warned that gale force winds, large waves and high tides could cause chaos across the east of the UK.

They said sea levels could reach the heights seen during the devastating floods of 1953 – but insisted London’s Thames estuary defences mean Thurrock is well shielded.

An estimated 30,000 properties could be flooded as a result of the tidal surge, the Environment Agency warned.

“We will be closing the Thames Barrier on Thursday night to defend London,” a spokesman said.

“The Environment Agency is monitoring the situation closely, working alongside partners including the emergency services, Met Office and local authorities. Teams are out on the ground checking that flood defences and barriers are in good working order, monitoring sea levels and issuing flood warnings.”