Jack and the Beanstalk is The People’s Pantomime!

IF YOU want to go and see a pantomime that is for everyone then you must go and see Jack and the Beanstalk at the Thameside Theatre.

They work so hard at the Thameside to make sure the audience is involved, engaged and made to feel good.

We must mention, first off, the role of Wain Douglas as Dame Trott. Wain has been the unsung hero of the last three pantos at the Thameside. He comes across as a weathered sixty-something northern comedian, when infact he is a thirty something Anglo-Swede!

But as the classic dame, he was the glue that soldered the panto. He had the advantage on Saturday night of a member of the audience (Hello John) who made the mistake of answering back. Like any great pro, Wain never let go and it made for a hilarious two hours of banter!

And there was much much more to this panto.

First off, it was great to see EastEnder Natalie Cassidy on the Thameside stage. And she brought her trumpet!! Natalie was a lovely, gentle, Fairy Meadows who enchanted the audience throughout.

Her perfect counterpoint was the horrible, cruel and nasty, Poison Ivy played by Joanne Henry. She reminded this reviewer of the witch in Chorlton and the Wheelies (youtube it!).

They have a limited amount of space on the stage but they used it very well, with video projections.

Jack Trott played by a handsome former S Club Junior star Jay Perry dominated the stage and was a fine singer as well as a great romantic lead. He was ably and deftly partnered by Amy Burrows as Princess Jill

In the background but very much part of the ensemble were the dancers who were dynamic and exciting.

The costumes were vibrant and dazzling but not as impressive as Daisy the Cow and The Giant. Infact, the Giant was the high-light for us (Giant-high-light-oh, please yourself!).

And let us not forget King Bumble played by David Burton who displayed a fine number of deft comedic touches.

LeeJay Townsend was also key as Simple Simon who, in the classic jester role, really kept the audience involved, engaged, laughing and enthralled whether it was the sunflower or just the corny jokes!

Overall, a triumph for this Polka Dot Promotion.

And another special mention to the star, Natalie Cassidy, who has really engaged with the Thurrock audiences, whether it was down at Lakeside or with this reporters grand-daughter after the show.

But we return to our headline. This was a lovely, feelgood panto. Perfectly paced with a right balance of comedy and song. A great cast and a perfect Christmas treat.

Full details of the panto can be found it you click on the banner on the front of this website or go to www.thurrock.gov.uk/thameside-theatre 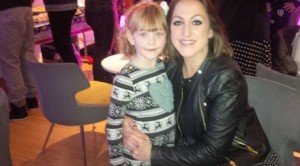