John was one of the first priests inducted by Bishop Laurie who was also a new Bishop.

In 2003 John was made Rector in a service attended by over 300 people and led by Archdeacon David Lowman.

John is a family man – father & grandfather and adopted father to Sam but his wife Kim is an essential half of the partnership and without her loving support he would not be able to achieve what God asks him to do.

At the weekend, people from St. Margaret’s and various organisations John is associated with came together to thank John for his ministry. John did not know that the surprise party was to take place in between services so was quite taken aback by the cards, gifts, cake and bubbly for the toast.

Among his jobs, talents, skills are

Clown – even training others in clown theology

Member of the Mothers Union

Columnist in the Thurrock Gazette

Actor – when Bishop John Wain retired he made an excellent Richard Attenborough.

One the 2 Johns in assemblies 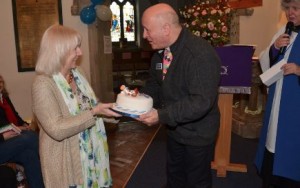 estival, Carols on the Green