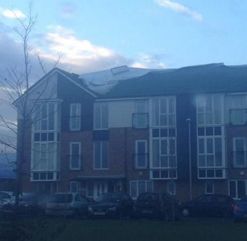 RESIDENTS of Bridgeland Road in Purfleet are demanding answers after their roofs were blown off by the storms on Monday night.

A number were left homeless and others with severe damage as the winds ripped through the borough.

Some have spent Christmas in hotels whilst others have spent the not so festive season with family or friends.

Residents have told YT that there has been a catalogue of incidents concerning the roof over the last twelve months.

Rachel Reid said: “Last year our block of flats lost a lot of tiles on the roof and there was water damage to the top flats. The property company came and fixed it.

“On October 28th (2013), when we had the high winds, the roof on the other block lifted sending tiles flying, one tile hit my husbands classic car which was parked below which caused £2500 worth of damage. We complained about this and was told there was no problem with the roof and that they would look at it.

“On December 22nd, the whole roof lifted again this time ripping up the lining and a skylight was hanging off. We rang OM Property Management who told us that it was fine so we sent them pictures of it and rang the fire brigade.

“These people have not been put into any accommodation and have been let down by Bellway and OM Property Management.”

In correspondence seen by Your Thurrock that residents claim is from a representative from the property management company has explained their side of the story.

The correspondence reads: “The storm in October caused many roof tiles to lift from all blocks in Griffiths Road and Bridgeland Road.

“As we already had contractors on site we were able to address most of the blocks immediately, but discovered that the tiles had originally be fixed with one nail and not two.

“We have reported our findings to Bellway and have been speaking to Chrissie Birch in customer services who has advised me that as this is an insurance claim, Bellway will wait until a counter claim is made via Cunningham Lindsey.

With regard to the block in Bridgeland Road, there is a flat roof in the middle of the block that has lifted causing severe damage to some of the properties. Again it appears to be a structural defect which is being investigated by the insurance company.

“I am sorry this has happened to you all especially at this time of year, and I can assure you I have been trying my very best to get this resolved as quickly as possible. Unfortunately my hands have been tied as this is an insurance issue; however I have been chasing on a daily basis to hurry up the process.

“Cunningham Lindsey have appointed one of their contractors to attend today (23rd December 2013) to make watertight and safe the block. I hope that by the time you receive this letter the building has been made water tight and the roof is safe so that we can progress with repairs and renovations to your homes.”

YT learned that following Monday’s incident, insurers attended at Bridgland Road but could not go up on the roof due to health and safety concerns.

YT will endeavour to contact those affected, who we believe have spent Christmas in nearby hotels.

YT has attempted to contact both Bellway Homes and OM Property Management Group. 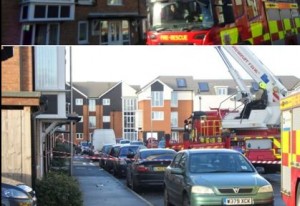