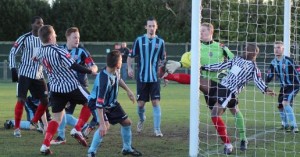 a two week break following the recent bad weather, Tilbury went down 3-1 to Burnham Ramblers who avenged their defeat earlier in the season. Despite Tilbury suffering from injuries and suspensions, the Dockers started strongly. Paul Vaughan had to make 6 changes from our win over VCD and laid siege on Burnham’s goal in the early stages.

In the sixth minute an Ashton corner was cleared off the line. Within two minutes the Dockers took the lead when another Ashton corner saw Ramblers have numerous attempts to clear their lines, Weemes struck the bar with a header and Danny Francis managed to score from his second attempt and bundle over the line.

Tilbury almost doubled their advantage just six minutes later when Zanelli fired wide. On 18 Burnham Ramblers were awarded a penalty when West was adjudged to foul in the box. Richmond struck the kick and was saved comfortably to his left by Chico Ramos.

Hunt went close as the home side dominated proceedings. It came as no surprise on 38 when Burgess struck home a beautifully taken shot from 20 yards beating Ramos at the far post.

In the final minute up to the break both sides had chances when Godwin Green saved well from a Blackman effort before Richmond was denied by a fine Ramos save. After the break, Ramblers continued with their forward momentum and quickly saw themselves take the lead when Williams connected with a Richmond pass, curling in at the far post. Gilbey had gone close shortly before but his effort was just over. On 66 Tilbury came close to an equaliser when the effective Gilbey beat the offside trap and hit past the keeper only to see his effort come off the post.
2 minutes later a rasping Burgess effort crashed off the bar and away to safety. The Richmond was again denied the excellence of Ramos as the home side continued to dominate. With 6 minutes remaining Burnham struck the post for the 3rd time when Williams thought he had scored. With 3 minutes remaining Burnham confirmed the points when Hunt crossed for Richmond to tap-in from close range.

The result sees Tilbury drop to 15th. Tilbury are not back in action until next Saturday when they welcome 6th place Harlow Town to Chadfields.