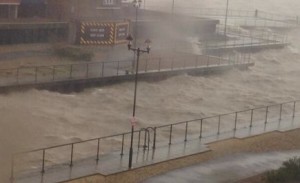 A SEVERE weather warning has been issued by the Met Office for the Thurrock area on Saturday.

The warning issued states that a spell of heavy rain is likely to affect south-eastern parts of England during the first half of Saturday, clearing eastwards early in the afternoon.

A further 20 to 30 mm of rain is likely in places and much of this could fall within a six-hour period.

The public should be aware of the risk of further localised surface water flooding and disruption to travel in the Thurrock area.

YT will keep you informed of any further details.

One Response to "Severe weather warning issued for Thurrock"