THURROCK’S motto may be: “From the Thames to the peoples of the world” However on Saturday afternoon it seemed to be that the Thames was making life treacherous to the people of Argent Street in Grays as the water levels rose above the wharf and onto “dry” land.

One of the residents of Argent Street, Emma Webster, had been watching the levels on Friday and Saturday morning as they continued to rise. By Saturday afternoon, the water had risen further.

Essex Police were on the scene.

An Essex Police spokesperson said: “APCSO is on the scene to keep members of the public away and Thurrock Council has been alerted.”

Update: 1530 hrs. Chief Inspector Hodder stated that high tide had passed and so the river levels were going down.

YT understands that the next high tide will be at 3.30 on Sunday morning.

Questions may be asked as to why the flood gate at the Wharf was left open. 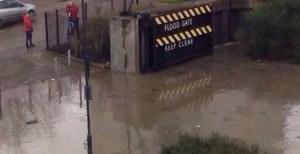 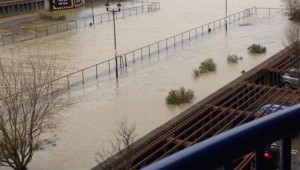