TRACEY Douglas 51 and Chris Salton 51 from Fobbing were recently crowned Cambridge Weight Plan Regional Consultants of the year for East Anglia as well as being one of the companies top 50 sales people, winning a holiday in the process!

Tracey started training as a Cambridge Weight Plan Consultant in November 2011 after losing weight on the diet herself. The couple met after both their marriages broke down and decided to start a new path together and became full time Cambridge Weight Plan Consultants in 2012 helping many people lose weight. Tracey said: “We now see more than 80 people a week and seeing our clients change their lives for the better is truly inspirational”.

In May 2012, the couple were asked to be part of a Cambridge promotional DVD which was a real honour. Chris said: “It is at this point that we really started to believe in ourselves and decided to take the business to a different level”.

Tracey said, “We love everything Cambridge stood for, the ethics, the products, the training, the support and the fact that Cambridge is so successful as a diet to follow. We finally had something to strive towards after a hard few years, we had a purpose to our days and we could see our dream starting to grow” At the 2012 Convention they won the ‘Flying Start’ Award and this encouraged them to focus on growing their business to become top level award winners.

This is something they achieved at the 2013 Convention in November. Tracey said: “We were honoured to be asked to do a presentation at the Convention in front of more than nine hundred other Consultants to share our story. The experience was amazing but to then win two awards on top of that was beyond belief, we were so proud of ourselves and thrilled to be part of such an amazing event”. 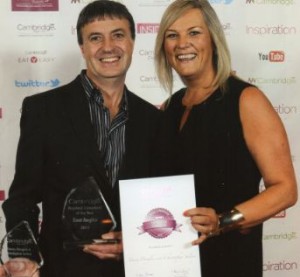 Anyone interested in losing weight and feeling motivated should call Tracey and Chris on Tel: 07753636643 or Email: looking.good@hotmail.co.uk