THE first Five Star Soul at the Goldmine, Orsett Hall event was a complete sell out with over 700 people attending the first event in November 2013. Local Businessmen Steve Abbs and Simon Croft who are behind the new venture were overwhelmed with the public’s response and are very pleased to announce four dates for 2014:

Once again the events will run from 7.30pm until 2.00am at Orsett Hall in Prince Charles Avenue, Orsett and are strictly for the Over 30’s. The final line up of the DJs for the February event will be announced in the next few weeks but we are pleased to announce that the Live PA for the February Goldmine will be The Drizabone Soul Family:

Orsett Hall are thrilled to have such a fantastic line up once again after the superb performances from the All Stars in November 2013 and look forward to the performance on the night.

Tickets are already selling fast for the event in February but tickets are available from the Events Team at Orsett Hall on Tel: 01375 891402 or Email: events@orsetthall.co.uk or you can buy tickets online at www.eventbrite.co.uk/event/6289174089 (booking fee applies).

Get your tickets now before they sell out again!

Steve and Simon have also re launched some Goldmine merchandise in the way of
T- Shirts and car stickers, just like back in the day, which are available from the website www.imagoldminer.com 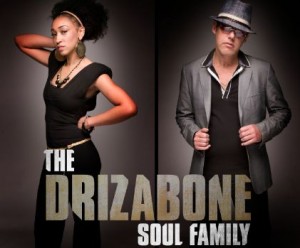