Rugby: Perfect day for T-Birds in triumph over Bath

WITH the T-Birds already confirmed as League Champions of Championship One South, Thurrock Ladies hosted a VP Charity Dinner in support of Breakthrough Breast Cancer before what should have been the final League game of the Season against Bath Ladies.

Following a fine meal, the guests were treated to a Feast of Rugby as the T-Birds once again demonstrated their dominance of the League with a 16 try spectacle.

Wearing Pink socks in honour of the charity, the players all contributed towards the estimated £500 raised on the day.

Bath’s forwards put up a decent show in the scrum but the team was outclassed in every other department of the game.

The Thurrock backs ran riot and by 20 minutes the fifth try and the bonus point was secure with Harvey, Emerson and Scott (twice) crossing the line backed up by Phelps from the Forwards.

Even though Bath did some fine work themselves, their defence was mesmerised by the midfield lines of Scott, Burford and Harvey and dominated by the physicality of the Thurrock pack.

With the pack lead by Mercedes Foy carrying hard around the ruck, Bath’s only option was to try and slow the ball down, but the Referee kept them honest and the breakdown clear by dishing out 2 Yellow cards.

48-0 at Half Time became 96-0 at Full Time with Harris scoring 4 trys, Scott bagging a hat trick and kicking 8 conversions while Francis, Foy and Phelps got 2 each.

To their credit, Bath fought hard all game and did not let their heads drop, still putting in try saving tackles until the final whistle.

The wet weather has played havoc across the country with waterlogged pitches and Thurrock still have to try and find a date for a postponed match at Cheltenham.

Players of the match Fly Half Scott and Flanker Prosser.

In the next home fixture at Oakfield, the T-Birds take on local rivals and Premiership side Aylesford in the Cup on February 2nd. 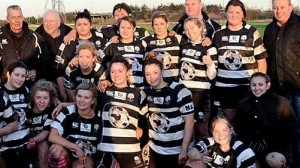