Football: Stormy weather for Rocks as they go down to another defeat 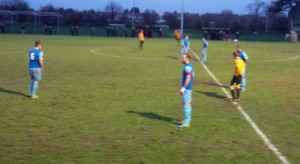 Once again, the miracle makers at Rookery Hill managed to get the game on and in tricky conditions underfoot, East Thurrock tried to get a grip on the game.

Covo clearly sent the men out with a task of getting the ball up front as soon as possible and feeding the stylish loanee Mitchell Pinnock.

The first half chance came when David Hughes spilt a shot from Stefan Payne but he gathered soon after.

In the 9th minute, Jack Hopkins had a point blank shot saved from close range by Urchins keeper, Echepare.

In the 12th minute, Stefan Payne scored a beautiful, beautiful goal when he shot from thirty yards out to see the ball sail over the head of David Hughes.

The Urchins looked bigger and more robust than the Rocks but despite that the Rocks enjoyed more possession without really threatening.

Hornchurch had the odd chance: a scuffed shot from a corner in the 35th minute nearly found its way in.

At the other end, David Bryant’s turn and shoot chance was just wide.

Just when you thought The Rocks would hold out for the first half, Stefan Payne scored his second. In the 44th minute, the sixth corner of the half was floated over, headed back from the far post and in the melee, Payne poked the ball home.

What East Thurrock needed was an early goal and sure enough in the 49th minute, Jack Hopkins scored a cracker when he launched a curling shot high into the Urchins goal.

The Rocks looked like they wanted to reap the wild wind behind them and a free kick soon after also nearly went in.

This now became a fierce battle with full blooded tackles and challenges. Covo brought on Leon McKenzie as they looked for the equaliser.

But this was a disciplined Hornchurch who have a well drilled and experienced defence.

The Urchins came back into the game with some neat play. A Stefan Payne shot went close as they pressed forward.

Tempers became more and more frayed as the game intensified.

The Rocks thought they had scored in the 83rd minute when a free kick from the half way line by Tom Stephen went straight in but the referee judged that a Rocks player was offside.

It was rough justice in stormy weather and a resolute Hornchurch were able to see out the rest of the game to secure the three points.