“I’m the real Rocky Balboa,” claims East Tilbury based fighter Robin Deakin, 27, fighting back to prove those wrong who dubbed him ‘The Worst Boxer in Britain’.

With a professional record of one win and 50 straight losses, Deakin has been under fire from national press, being proclaimed the worst boxer and Britain, even losing his British Boxing licence after the British Boxing Board of Control (BBBC) became concerned for his health.

But with a German permit, Deakin looks to prove many people wrong as he steps out for his 52nd fight in London, on March 1st.

Unable to walk until he was six years old, Deakin expressed how hard it has been recently, but why he continues to fight, “I love boxing. Boxing is my life, it’s all I know. Boxing has been a saviour for me and my disability.

“It’s depressing getting recognised. People come up to me and say ‘Oh, you’re the worst boxer in the country’, but I’m not going to let it knock me off my game.”

Speaking about his upcoming fight, Deakin said, “I will fight anyone, at any time, but if you’re not getting proper preparation, you’re not going to get the right results.

“I’ve had nine weeks to prepare for March 1st, and it’s going to be explosive. There’s only going to be one winner and people will see I’m not the worst boxer in Britain.

With a win, Deakin could start a new chapter in his boxing career, and he believes if he can keep on winning, then he can not only get his BBBC licence back, but earn a fight for the title.

With the opportunity to write one of the greatest stories in the sport, Deakin put in plain words, “I want to be in the record books. I’m Rocky Balboa. That was a 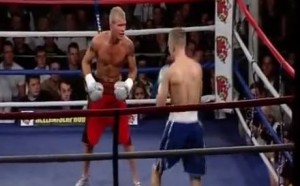 film, this is the real story.”