Cruisers, drugs and gangs all discussed at Chafford crime forum 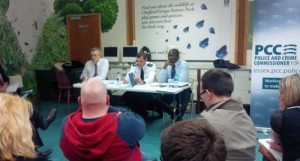 POLICE, councillors and the the police and crime commissioner Nick Alston came together to discuss crime in Chafford Hundred.

There is a public and police awareness of an increase in anti-social behaviour over the winter months. This behaviour ranges from a mugging of a female teenage to boy racers jeopardising the safety of the general public.

The police feel “It’s about working together” as not only is the behaviour effecting residents of Chafford Hundred but stretching to impact on Ockendon and Grays also.

Nick Alston, declared that, in his opinion, the crime data of the police can be trusted, he feels that the police should work together with the public as Nick Alston said “If you are concerned you need to call the police, or else if the police don’t know they don’t stand a chance.” The police Commissioner felt that due to the 4% deduction of crime (from the 1st of April to the 3rd of March) things were looking positive. The public of Chafford Hundred, present at the meeting, vehemently disagreed.

The majority of them feel that the police need to be a bigger part of the community.

The first incident that the meeting tackled was the “Anti-social behaviour”. This was clearly very close to the public’s heart.

Police Inspector Leigh Norris declared that even since he stated driving (about 20 years ago) cruisers have been an anti-social behaviour issue and Thurrock’s Lakeside Industrial park is one place they chose to meet. He said: “The winter is normally a quieter time but this winter has been different”

Cruising and drifting are a big problem in Thurrock that is also causing a lot of noise that the local residents resent. Drifting means to skid in one continuous movement around a roundabout. It has become more common after films such as fast and furious began to glorify driving dangerously. Actor Paul Walker who died in a high speed collision last year is one example of how dangerous cruising/ dangerous driving can be.

There have been a few different things put in place to try and reduce the amount of people cruising in Thurrock. During the summer a dispersal order had been put in place as a tool that could be used to help this process. The public were also coming up with ideas to help the issue surrounding cruising.

After the dispersal order wasn’t renewed the public wondered why, as it seemed to be effective. When asked the police responded by saying that the reason the dispersal order wasn’t renewed because throughout the summer, that it was in place, it was often found that the numbers were greatly reduced. As it was effective they decided to cancel it before it lost all of its effectiveness.

Places like Tesco and McDonalds in the Lakeside Industrial Park are open 24 hours a day, this gives the cruisers a warm place to stop and somewhere to get refreshments. Both shops are now aware of what is happening and therefore are also in communication with Thurrock Council trying to see what they can do about this issue.

There were several suggestions put forward considering how to stop cruising, some suggestions consisted of the idea of installing more speed cameras. There have however been CCTV cameras installed in the car parks to ensure anyone misbehaving is caught.

One issue a concerned resident bought up was that “Cars are travelling the wrong way around the roundabouts illegally”. The police response to this issue was that they have a lot of other crimes to deal with on top of this. Burglaries are more important to deal with rather than cruisers. The police insisted that they have still got the same priorities as the public and that when the police leave the meeting they are sure to give this issue some attention.

Some nights there are hundreds of cars parked along the roundabout. Over 150 cars were parked one day, although the public were relieved to see at least seven police cars. There were even a few hundred spectators all putting their life at risk whilst recording the cruisers.

Last year however there was a positive outcome, it was one of which included 80 cruisers going to court over their crimes in a space of a few days.

The Gangs of Chafford Hundred

The next issue focused on was the issues of gangs coming into Chafford Hundred. The police expressed a belief that the word “gang” means something different to different people and so it shouldn’t be used. The police also say that to the public a large group of youths wearing hoodies and therefore being intimidating is a gang, where as some may consider it as being a large group of people being anti-social, causing issues for the neighbourhood and committing crimes.

Since the Chafford Hundred railway station “Turned Oyster” you get large groups of people intimidating teens making their way into Thurrock. This issue is one of which is difficult to deal with due to the fact “They come to Chafford Hundred for Lakeside, cause trouble there, get kicked out of Lakeside and hang around on our streets” expressed one concerned citizen.

The Police said: “2.2 million people use the train station on a regular basis and so checking on every single one of them is going to prove a difficult task.

The public also complained that Tesco Express, a small Tesco located near to the station is often difficult to get into due to the large intimidating people blocking the entrance restricting local residents from getting their shopping.

Footpaths are over grown and streetlights are out causing an obvious location of which ‘gangs’ are to attack, by taking down the street lamp number and reporting this it can be easily sorted out.

That’s not to say that only gangs are terrorising the streets of Thurrock as garages are being robbed and in the space of the last year the amount of robberies have increased in the area by 20%. One man expressed that “the community grew up together” and that he felt these people were threatening to jeopardise their close knit community.

Police however are going into schools and educating students about the dangers of crime, in this they also cover the dangers of drugs, another issue that the meeting tackled.

One resident claimed that there are drug dealers littering Chafford Hundred and the police are aware of where the issues lay and so therefore say that they are handling this issue, despite being particularly vague.

Once again, the police referred to their stats and stated that although some crime has increased “Violence against a person is down 7% and car crime has gone down 25%”.

The public feel that there isn’t enough police visibility on the streets and if there was there would be a decrease in public intimidation. The public feel there need to be more specials in Thurrock. There is also a public doubt that there is a value for money for the police. There was clearly a desire for police officers on the beat .

Overall it was a productive meeting where the public were able to express the issues they felt there was with how the police handle criminal behaviour in Thurrock.

Prospective parliamentary candidate for Labour Polly Billington was at the meeting. She commented:

“Thurrock needs visible police officers that can tackle the fears that people have over mugging and anti social behaviour, as well as undertake long-term operations like those to crack down on ‘boy-racers’.

“But the police commissioner has spent under budget on police staff costs and this year the police precept is the only part of our council tax bills that is going up.

“People in our Chafford Hundred and across Thurrock deserve to get value for money from the police. Right now, it doesn’t look like they’re getting it”

3 Responses to "Cruisers, drugs and gangs all discussed at Chafford crime forum"