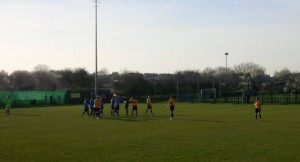 The game started quietly perhaps as both teams knew that this was such an important match. Infact Lewis Smith’s shot at the keeper in the 7th minute was the first real action of the game.

The Rocks should have scored in the 10th minute when after deft skills from Matthew Pinnock he put the ball into the path of Lewis Smith but his shot again was straight at the keeper.

Wingate’s best chance early on came in the 15th minute when Steve McCall’s shot on the right of the box brought a good save out of David Hughes which resulted in a corner. Hughes did well again to save from a Rifat header.

The next missed chance came to Wingates’s Bolle who pounced on a mistake by the Rock’s defence but with only the keeper to beat he pushed the ball wide of the post.

Rocks were very nervy in defence and it just seemed like a matter of time before Wingate would punish them.

The game became bogged down in the middle of the field and The Rocks started to become frustrated at some of the referee’s decisions. In the 40th minute, they earned a free kick that Ross Parmenter sent over but Sam Higgins header was off target.

At the other end, another powerful header from Ahmed Rifat rifled over the bar.

The second half didn’t start well as both teams continued to niggle away at each other. The Rocks had more of the possession and looked in control but were finding it difficult to carve put decent chances.

However, it was Wingate who took the lead in the 67th minute with neat work down the left. The ball was pulled back from the dead ball line and Josh Kennett stroked the ball home from close range.

The Rocks piled on the pressure but again found chances hard to come by with Sam Higgins, particularly quiet. Boss John Coventry rang the changes with Stuart Thurgood and Neil Richmond coming on.

In the dying minutes, Wingate keeper Smith made an outstanding save from close range that saved all three points for Wingate.