THURROCK mayor, cllr Tony Fish was joined by cllr John Kent, the leader of Thurrock Council and an assembled civic party who celebrated the first ever Commonwealth Day.

Cllr Fish read the Commonwealth Affirmation to mark the event.

Thurrock was one of 500 places in the UK, Channel Islands and the Isle of Man to fly the Commonwealth Flag.

It is the first time local authorities and civic dignitaries, community groups and charities throughout the British Isles are taking part in local flag raising events and ceremonies. 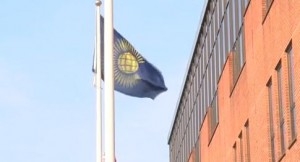