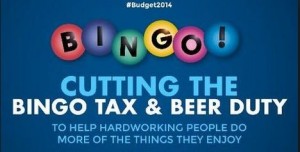 SOME SAY it was all going so well until the Tories produced that Beer and Bingo poster that looked like something out of Viz comic advert. Either way, both prospective candidates for Thurrock’s two constituency were not impressed by chancellor’s George Osborne’s budget.

“The truth behind Osborne’s “smoke and mirrors” routine is that residents are worse off now than they were in 2010 with rising energy bills, rail fares and food costs.

Thurrock candidate, Polly Billington said: “The reality is that George Osborne seems to be oblivious to the type of lives that most people are living and they are really struggling. These living standards have been going down for the last 44 months.

“Their worries are not being met by this budget. VAT has knocked out many benefits for hard working people. There should have been a bankers bonus tax and that could have meant we could have put into a jobs guarantee.

“The reality is that the jobs figures mask people on zero hours, who do not have the full dignity of full employment.”