EAST THURROCK put in their second blistering performance of the week as they beat Hendon 6-1 at Rookery Hill. 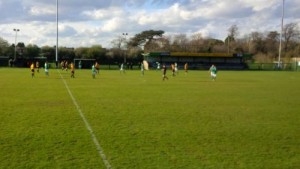 Just the other week, Rocks boss, John Coventry said: “Do you really think Sam Higgins isn’t going to score for the rest of the season. Sure enough, Higgins opened the scoring after just two minutes, nodding in from close range after a corner had caused panic in the Don’s box.

The surface was quite bumpy which made control difficult and so keeper David Hughes did well to hold a shot from outside the box by Hendon’s Flegg.

The Rocks looked very confident as David Bryant skipped past defenders whilst the total commitment of Rick Symons in midfield was troubling Hendon.

In the 22nd minute, Bryant powered down the right, got to the deadball line, cut the ball back to Sam Higgins but his fierce shot went sailing over the bar.

Hendon’s first corner of the game came after a fine shot from Tony Taggart was headed over the bar by Stevie Sheehan. Much of their good work came down the left hand side through Jack Bennett.

In the 34th minute, Mitchell Gilbey produced a wonderful pass with the outside of his foot but Sam Higgins dwelt when he should really have hit the ball first time.

Higgins made no mistake in the 39th minute when he put East Thurrock 2-0 up with a fantastic first time strike from just inside the box.

In the 44th minute, Neil Richmond made it 3-0 with a simple tap in after keeper Joe McDonnell could only palm away a shot by Lewis Smith.

Hendon rang the changes in the second half with subs Anthony Thomas, Dave Diedhiou and Jose Figura all coming on in the first five minutes. Unfortunately, midfielder Casey MacLaren received a head injury and had to go off, leaving the hapless Hendon down to ten men.

Things did not get better for Hendon. In the 69th minute, Sam Higgins completed his hat-trick with a lovely turn and shot from the edge of the area. In the 72nd minute, Mitchell Gilbey found space, broke free and tapped the ball past the keeper. In the 80th minute, Mitchell Gilbey scored the sixth when he again tapped in from close range after a Smith shot rattled the crossbar.

East Thurrock are still in relegation trouble but with form like this, they have every chance of keeping their destiny in their own hands.