THURROCK T-Birds, Rachael Burford and Emily Scott have made the plane for the IRB World Sevens Series this weekend (April 5-6) in Guangzhou, China.

Coach Simon Middleton has called up Rachael Burford, Marlie Packer and Megan Ellery into the squad, which will once again be captained by Richmond’s Abigail Chamberlain.

Middleton said: “We’ve made some changes again for this leg and I am excited to see how the squad goes. It has been a tough selection as it really has been a tremendous squad effort with everyone contributing to our programme.

“Rachael Burford is a natural replacement for Claire Allan who has picked up an injury and she’ll bring a lot of experience to the squad. Marlie was one of the stand out players in sevens last season so it’s great to have her back in the mix and keep her in touch with our Sevens programme, while Megan was unlucky to get injured in Dubai and miss out on the last two legs. She is a quality player with a lot of potential.” 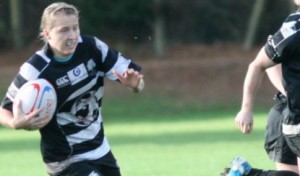