Football: Rocks steady the ship after seeing off Canvey

EAST THURROCK grabbed three vital points with help from a brace by Sam Higgins as they won 2-0 against Canvey Island at Rookery Hill.

Canvey started on the front foot with a number of dangerous attacks. Most of them were thwarted by the linesmen but they were a signal that Canvey had come for three points.

The Rocks did not have a chance until the 11th minute but Lewis Smith peeled off at the back but his shot was weak.

However, Rocks took the lead in the 14th minute, when Smith was bundled over in the box. Sam Higgins powered the penalty right down the middle.

And it was that man Sam Higgins again in the 19th minute, when, unchallenged, he picked his spot outside the box, and fired the ball home.

Canvey tried to re-group but they were making heavy weather of the bobbly pitch. A total hash of a corner in the 21st minute was a case in point.

The key part to the Rock’s game was the tricky diagonal ball followed by a ball into the corridor of uncertainty.

You had the feeling that Canvey could get back in the game if they were able to get the rub of the green up front.

For the rest of the half neither keeper was hardly troubled as the game got bogged down.

As the second half began, the key question was whether The Rocks, who were playing their fourth game in eight days would last the pace. However, Covo’s team were able to dictate the pace and so could stop, almost at will.

Canvey started to dominate the game but couldn’t find a way in. Even a free kick on the edge of the box failed to trouble the Rocks defence. Another free kick, just a few minutes later just sailed into the keeper’s hands.

Canvey simply did not appear to have a plan b or second gear as Rocks gently jogged towards victory. 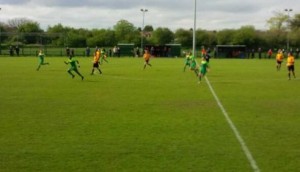