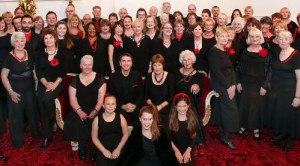 The programme for the concert includes opera choruses from Dido and Aeneas by Purcell, Idomeneo by Mozart and the rousing Dies irae from Verdi’s Requiem. The Royal Opera House Thurrock Community Chorus will perform Verdi’s Requiem in July at the High House Production Park, Purfleet.

The concert also features the London premiere of The Purfleet Chorus, taken from Ludd and Isis: The Purfleet Opera, written by Richard Taylor (music) and Stephen Plaice (lyrics) to celebrate the opening of the Royal Opera House Bob and Tamar Manoukian Production Workshop in Purfleet in 2010. The success of Ludd and Isis led to the creation of the Royal Opera House Thurrock Community Chorus which now has 140 members from across Thurrock. 80 members will perform in the Brandenburg Choral Festival.

Jeremy Haneman, Conductor of the Royal Opera House Thurrock Community Chorus said: ‘We are so looking forward to performing as part of the prestigious Brandenburg Choral Festival which goes from strength to strength every year. To be invited to take part in the Brandenburg Choral Festival just three years after we started shows just how far we’ve come in a really short space of time and is recognition of the excellence that the Chorus has achieved. I feel really privileged to be directing a community chorus which is so passionate about the music and sings at such a very high level.’

The Brandenburg Choral Festival is London’s biggest and widest ranging annual choral celebration for amateur choirs. The Festival opens at the end of December and runs through to May offering an extraordinary variety of choral concerts.

Tickets for the concert are available from the Festival Box Office on 020 7766 1100. Tickets £18, children £5. Please go to www.brandenburg.org.uk for more information.