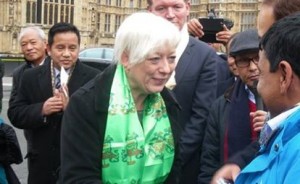 THURROCK MP, Jackie Doyle Price has told Newsnight what she would do if she was in the same position of (now former) Culture Secretary, Maria Miller’s position.

Speaking to the BBC programme and just a few hours before the Basingstoke MP resigned, Ms Doyle Price alongside other MPs with slim majorities was asked regarding the expenses scandal and the implications for those in marginal seats.

Ms Doyle Price (maj 92) told Newsnight “If I was in that position facing a difficult set of local elections; I wouldn’t be expecting my colleagues to defend me.”

Pressed on whether her own position would be improved if Ms Miller resigned, she repeated: “That’s a matter for her.”

When Newsnight’s Emily Maitlis said: “That’s a yes then”. Ms Doyle Price, with a wry smile on her face repeated the line of “That’s a matter for her.”

In a Telegraph survey (conducted before she resigned) of the 40 most marginal seats that the Conservatives must hold if they are to have a chance of winning the next election, not a single MP was willing to speak in the minister’s support other than Mary Macleod, her parliamentary private secretary.